Romans 8:31 (ESV) What then shall we say to these things? If God is for us, who can be against us? 32 He who did not spare His own Son but gave Him up for us all, how will He not also with Him graciously give us all things?

SO, WHY DO A SERIES FROM ACTS?

WHY IS ACTS IMPORTANT?

Acts 1:1 (NASB) The first account I composed, Theophilus, about all that Jesus began to do and teach, 2 until the day when He was taken up to heaven, after He had by the Holy Spirit given orders to the apostles whom He had chosen.

Luke 1:1 (NIV) Many have undertaken to draw up an account of the things that have been fulfilled among us, 2 just as they were handed down to us by those who from the first were eyewitnesses and servants of the word. 3 With this in mind, since I myself have carefully investigated everything from the beginning, I too decided to write an orderly account for you, most excellent Theophilus, 4 so that you may know the certainty of the things you have been taught.

Acts 1:3 (NASB) To these [the apostles] He [Jesus] also presented Himself alive after His suffering, by many convincing proofs, appearing to them over a period of forty days and speaking of the things concerning the kingdom of God. 4 Gathering them together, He commanded them not to leave Jerusalem, but to wait for what the Father had promised, “Which,” He said, "you heard of from Me; 5 for John baptized with water, but you will be baptized with the Holy Spirit not many days from now."

The Who and Why of Acts

The What and Where of Acts

Acts 1:8 (NASB) “… but you will receive power when the Holy Spirit has come upon you; and you shall be My witnesses both in Jerusalem, and in all Judea and Samaria, and even to the remotest part of the earth."

Acts 8:1b (NASB) “And on that day a great persecution arose against the church in Jerusalem; and they were all scattered throughout the regions of Judea and Samaria, except the apostles.”

Chapter 8-12 describes the church SCATTERED to Judea and Samaria.

Acts 13:1 (NASB) Now there were at Antioch, in the church that was there, prophets and teachers: Barnabas, and Simeon who was called Niger, and Lucius of Cyrene, and Manaen who had been brought up with Herod the tetrarch, and Saul. 2 While they were ministering to the Lord and fasting, the Holy Spirit said, “Set apart for Me Barnabas and Saul for the work to which I have called them.” 3 Then, when they had fasted and prayed and laid their hands on them, they sent them away.

Chapters 13-28, the church EXTENDED to the ends of the earth.

AN APPLICATION AS WE BEGIN

Luke’s story of the church resembles our own growth and development as followers of Jesus.

Colossians 2:6 (NASB) Therefore as you have received Christ Jesus the Lord, so walk in Him, 7 having been firmly rooted and now being built up in Him and established in your faith, just as you were instructed, and overflowing with gratitude.

What season are you in, ESTABLISHING, SCATTERING, EXTENDING ?

Philippians 1:6 (TLB) “And I am sure that God who began the good work within you will keep right on helping you grow in His grace until His task within you is finally finished on that day when Jesus Christ returns.”

The Book of Acts is an unfinished book for it is still being written in your life and the lives of all Christians who carry the light of Christ into a darkened world. (Ray Stedman, Birth of the Body, p. 15). 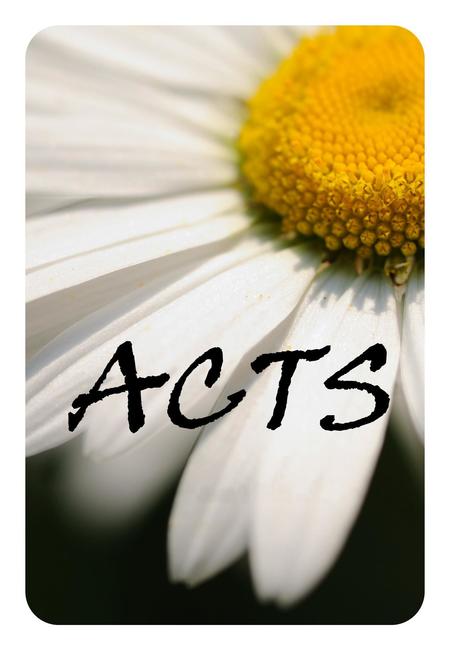 DISCIPLESHIP: What Are We Trying to Do?

A Ministry Without Recipes

When It's Time to Be Firm in the Faith